An adult-only campsite on a regular bus route to Cheltenham and Gloucester is a great place for a couple wanting an urban break full of historical interest, entertainment and stunning places to eat.  Briarfields is on the edge of Cheltenham and is open all year round so, like us, you can visit out of season.  The site is enclosed by trees and has good-sized pitches and clean facilities.  With buses from the entrance, the background road noise is a small price to pay for the convenience of being able to easily visit the historic town of Cheltenham and the city of Gloucester. 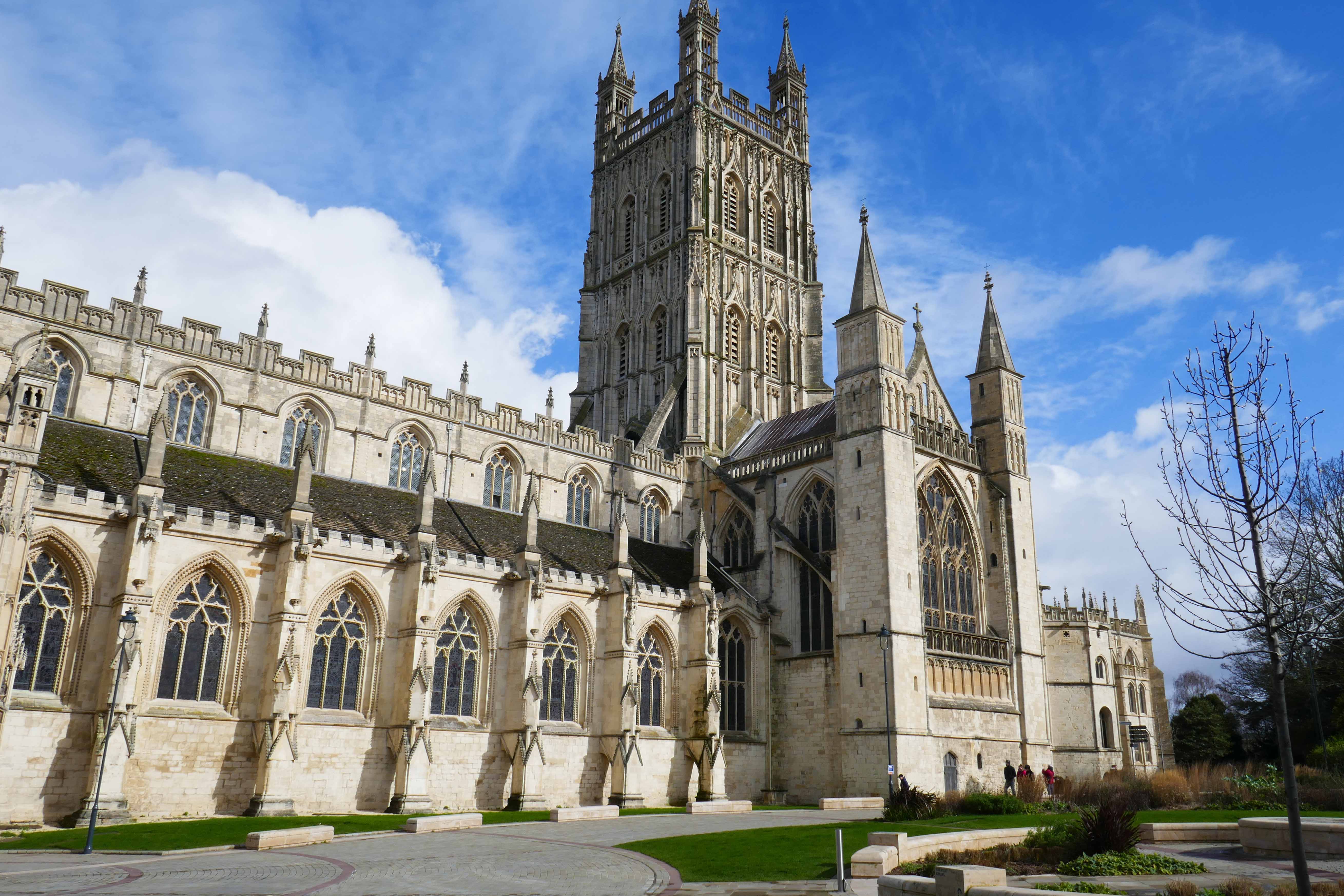 You get off the bus in Cheltenham near to the brilliant white Regency buildings of The Royal Crescent.  I had a copy of David Elder’s Cheltenham Heritage Walks guide book with me and we set off on some of the nine themed walks in this book.

If it is a fine day then the perfect thing to do in Cheltenham is to walk to some of its parks and gardens.  A highlight of your tour will be Pittville Park, about 15 minutes walk from the town centre that gives you chance to admire the large Regency houses and green squares you will pass on the way.  With a duck pond, a boating lake, a playground and cafe and on the hill the stately Pump Rooms, Pittville is an lovely park.  The elegant columned Pump Rooms has a domed roof and inside there is a tap where you can still sample Cheltenham’s water.

It isn’t my favourite thing to do, unless I actually need something, but even I can recognise that Cheltenham has a great shopping centre.  Whether you are like me and don’t get beyond window shopping or do the real thing it is worth keeping an eye out for some of the statues among the shops  and follow Cheltenham’s story through its art.  The Minotaur and The Hare [in the photo at the top] is easy to find but look carefully and you might spot some of the small pigeon statues too.  These remember the role of this humble bird in Cheltenham’s history when a local farmer spotted pigeons pecking at salt deposits at the mineral spring on his land.  In the Regent Arcade you will want to check the time and watch The Wishing Fish Clock on the hour or half hour.  This colourful and fun tall clock with a goose, golden eggs and other animals, has a fish hanging below the clock that blows bubbles to the tune, ‘I’m forever blowing bubbles.’  The Imperial Gardens near to the centre are where you will find the statue to Gustav Holst and Cheltenham also has a museum to this composer who was born in the town.

Walking further, on the edge of the town we found Sandford Park.  This has none of the grandeur of Pittville Park but offers a respite from the bustle of the town and has a pretty stream running through it and more statues.

We visited The Wilson to find out more about Edward Wilson, the local polar explorer and artist who took part in two Antarctic expeditions with Scott.  Wilson, Scott and Henry Robertson Bowers died in a blizzard around 29 March 1912 still 148 miles from their base camp and just eleven miles from a food stash.  As well as the room to Edward Wilson the gallery has paintings, and some stunning and elegant arts and crafts furniture that I would certainly buy if I had lots of money.

Taking the bus in the opposite direction our first stop in Gloucester was the Cathedral and this is surely a must-do for anyone in the city.  We took one of the tours the cathedral offers and found it was a great way to get much more out of our visit and understand the layers of history in this beautiful building.  As well as Edward II’s tomb, you will gaze in awe at the medieval east window that is the size of a tennis court and enjoy the elegant cloisters that are popular film and TV locations.  If these tours are running when you are there I would recommend you join in.  Afterwards we climbed the steps to the Tribune Gallery to get a whole new perspective on the building.

Walking to Gloucester Docks we had coffee and croissants in an Italian cafe where the chocolate croissant came not just with a chocolate filling but also a chocolate topping.  Outside a group of Vespa owners were congregating by the water and comparing their scooters.  With the sun shining we could have been in Italy!

The Victorian warehouses at Gloucester Docks have been restored and this is a watery area of cafes and restaurants that is so pleasant to walk around.  The National Waterways Museum is inside one of the huge warehouses on the Docks.  Each floor has low ceilings and small windows and was designed to store cargoes that arrived here along the canal from Avonmouth and the River Severn.  The oral history exhibits bring to life the hard work in all weathers of the workers on the barges.

Also accessible by bus from Briarfields, the Jet Age Museum has a mostly indoor collection of Gloster Aviation Company (GAC) planes, apparently the company changed its name from Gloucester as anyone outside England struggled to pronounce it!  GAC built the Meteor, the RAFs first jet that saw service in the Second World War.  GAC started life in Cheltenham and worked with Frank Whittle to build The Meteor, testing it in 1941 and flying with the RAF by 1943.

The museum is run by enthusiastic volunteers and is packed with information.  You can concentrate on the planes or dig deeper into a particular aspect of aviation.  Visitors can have a bit of a hands-on adventure climbing two ladders in and out of the cockpit of a Vulcan bomber, a cramped and stuffy place that isn’t for the claustrophobic.  The five of us each had a crew member’s seat and our guide described what each of us would have been responsible for on a flight.  Easier to get into and more comfortable was the BAE Trident, the first passenger aircraft with an automatic landing system, built by a local firm.  There are smaller simulators for children too.

If you want to read more my travel article about this area that was published in MMM in November 2020 can be found in the list of MMM published articles.