At the moment, with coronavirus restrictions, I can only dream about campervan trips.  When we are able to travel again, Italy will be on my list of places to revisit as I always enjoy finding some of that stunning country’s lesser known sights.  Tucked away in the north-east of Italy, near the Slovenian border, is the Friuli-Venezia Giulia area, a lovely part of Italy that we only found thanks to our lack of planning.

Our campervan trips to mainland Europe are only ever sketched in, with little detailed planning.  We were therefore excited to have the opportunity to explore somewhere new as we drove over the Slovenian border into Italy’s Friuli-Venezia Giulia.  Invaluable in this exploration was a guidebook we had picked up in Slovenia by chance that showed the wealth of natural protected areas in this corner of Italy; it seemed like our sort of place and we decided to stay for a while.  From the guide I learnt that Friuli-Venezia Giulia has it’s own Fruilian language and is packed with landscape variety, from wildlife-rich flat coastal wetlands on the Adriatic to the splendour of the foothills of the mountainous Dolomites and also has plenty of history.

We chose Belvedere Pineta Camping Village as it gave us good access to the excellent network of dedicated bicycle paths around Grado.  This is a large and rambling site that was quiet in late May.  Set among the trees, insects can be a problem but this does mean that there is plenty of bird life.  We would eat breakfast entertained by jays, a nuthatch, magpies and blackbirds and in the evenings scops owls made their sonar-like calls overhead and fire flies lit up the bushes.  One morning we watched a hare lolloping around the empty pitches at the furthest edges of the site.

Before reaching the campsite we used the guide to find the Doberdo Lakes Nature Reserve where lakes have formed in depressions [poljes] of the limestone / karst.  We had some trouble reaching the lake as the road was closed due to road works; however the diversion took us to a parking spot on the northern edge from where we walked through the woodland to the jungle-like reedy edges of the lake.  The best views over the pretty lakes were from a high crag that we hiked up to and where there is climbing and a climbers hut at Castelliere Gradina.  We also stumbled upon World War One defensive tunnels cut into the rocks.

Cycling north from the campsite there is an excellent traffic-free cycle lane alongside the main road for the 6.5 km to Aquileia.  We returned this way but got to the ancient Roman city of Aquileia on a longer route following quiet winding lanes [11.5 km] after turning left from the campsite entrance.  This took us through large flat fields of crops and vines and alongside drainage ditches and canals.  We stopped often to take in the agricultural scenery and see the ducks and geese on the water.  Aquileia is popular with visitors and has information boards to describe the sights.  We walked along the Roman harbour remains where the now silted-up river made it difficult to make much sense of what you could see.  For a small fee you can visit Aquileia Cathedral which has some stunning early mosaics.

Cycling to Grado through this low-lying landscape is an easy 7.5 km from our campsite on dedicated paths and it is popular with all abilities and ages.  The short distance look us a while only because we stopped so often to admire the views across the lagoon and see the wildlife; we were particularly excited to spot a pair of African sacred ibis.  The town of Grado is on an island in the Adriatic and we were cycling over a five-kilometre long bridge that crosses the dramatic and panoramic waterscape of the lagoon.  Grado is a classy resort with a harbour full of boats and a well-kept promenade dotted with sculptures.  We wandered through the town’s attractive historical centre and found its cluster of ancient churches that use re-cycled Roman columns and have sixth century mosaics.  The Basilica di Santa Eufemia has a pulpit resting on old Roman columns and is covered by a brightly coloured Venetian canopy.  The octagonal baptistery is 5th century, as is the Santa Marie delle Grazie that again has re-used Roman columns and capitals in its interior.

You could cycle to the Valle Cavanata Regional Nature Reserve from Belevedere Pineta Camping Village [it is just over 30 km round trip] as there are dedicated cycle routes all the way.  Alternatively you could stay at one of the many campsites to the east of Grado and be nearer.  We opted to drive to the Valle Cavanata visitor centre on the Grado lagoon so that we could cycle around the nature reserve.  At the visitor centre we were given a free map showing cycle routes that allowed us to explore the area at our own pace.  This reserve is a paradise for casual bird watching and near to the centre we stopped to watch the flamingos and egrets.  Cycling out towards the Adriatic coast on sandy tracks we met flocks of bee eaters.  At the coast we cycled along the top of the dyke with views across the sea until we reached Caneo.  Here small fishing boats were moored in tree-lined creeks and we watched two coypu swimming along the Isonzo / Soča river at the estuary.  We returned a different way along the minor roads by canals and drainage ditches and by fields of cereals and fruit trees.  The area is well organised for cycling and popular with German and Dutch visitors.  On the way back to the campsite we stopped at one of the many roadside stalls to buy fresh strawberries, asparagus and red onions that are grown here. 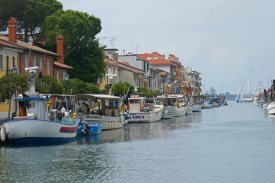 It was only from a recommendation by a couple we got chatting to on the campsite that we heard of the small town of Palmanova, about 25 km north of our campsite.  We drove to the town that sits inside a 16th century Venetian nine-point star-shaped fort and was only completed in the Napoleonic era.  We found parking for the Blue Bus outside the walls and entered the town through the Udine Gate, one of three gateways, after taking a look at the aqueduct system.  A short walk along the main street and we were soon in the huge central square, the Piazza Grande, the scale of which feels out of proportion for the town.  Reconstructions of military and water management equipment from the past sit in the square and six roads radiate from this large piazza, each grandly flanked by two statues.  Palmanova was built as an experimental utopian community as well as a defensive fortress city against the Ottomans; however, for some reason this charming town had little appeal and in the 17th century people were paid to encourage them to live there.

We moved on to Riserva Naturale Regionale Del Lago di Cornino.  This small lago provided a perfect short halt, with parking above the lake that is an almost unbelievable vivid clear turquoise and sits prettily among trees and high crags.  After lunch looking over the view we sauntered around the circular lake footpath.  Peering through the trees over the water, we fortunately spotted an adder hanging ominously from a branch over the water before we alarmed it.  Overhead numerous griffon vultures, reintroduced to the area, circled slowly.  No doubt if we’d been a victim of the adder they would have made a tasty meal of us!