When we moved to Morecambe last November we inherited a garden, having been without one for many years.  Although it is lovely to have some outdoor space, unfortunately, the garden that came with our house isn’t a perfect mature garden that requires little input from us.  In November, the garden was mostly sleeping and what we seemed to have was lots of empty beds waiting to be filled, a rough selection of uneven paving slabs and pitted and cracked concrete paths and a few over-grown shrubs fighting each other for space alongside self-seeded buddleia bushes and brambles.  We tried to remember what it was like in the summer when we had viewed the house but the detail escaped us, we would have to wait and see.

The garden had missed the tender loving care of an owner.  Before our occupation our bungalow has been tenanted for eight years by different families.  Tenants often know their time in a property might be short and don’t always invest in the garden and in the case of our bungalow neither they nor the landlords were gardeners and they both neglected the outdoor space.

We played a waiting game over the winter, just getting out on fine days and keeping the garden tidy but avoiding disturbing anything that might be interesting as every plant is precious.  Some of the over-grown bushes benefited from being pruned in those dormant months.  As we worked in the garden we began to spot signs that this was once a loved garden; someone had carefully chosen these shrubs and designed the flower beds and digging we would sometimes find an old label for plants that had once been purchased and planted here.

As spring began to appear we started gently dividing some of the tangled shrubs and we noticed green shoots appearing.  Working in the front garden, neighbours would stop and introduce themselves and many of them would tell us stories about the garden.  ‘I helped the couple who lived here until eight years ago, we planted over a thousand bulbs in this garden,’ the chap who lives a couple of door away told us one sunny afternoon as we tidied up the beds.  That explained the profusion of spring flowering bulbs that had begun to emerge as the days lengthened, we enjoyed bluebells and tulips for months.  I like the earthy link with a couple we will never know and it is fantastic that their love of gardening still peeps through.  As the year progressed we looked forward to seeing what else would pop up [the middle picture shows some of the plants we have inherited].

Working in the garden reminded me that every house I have ever lived in has had a garden that needed considerable amounts of work and care.  Is the country full of neglected gardens or have I been unlucky?

Over the last three months the garden hasn’t just revealed spring and summer bulbs.  We have a honeysuckle that has climbed over the roof of the garage, apparently the only gardening the previous tenants did was to try and keep this honeysuckle in check.  In the front garden a rose bush I pruned in the winter has been producing glorious yellow sweet-smelling blooms since April, working down-wind of this rose bush is pure joy.  Those previous gardeners clearly loved roses and we have three or four bushes in the front garden.  I imagine the elderly couple planning the garden and picking their favourites for scent and colour. 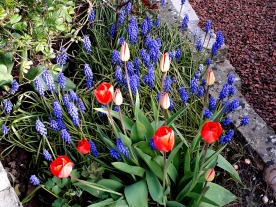 Along with the valued plants, a healthy crop of horsetails have pushed their soft feathery fir-tree like shoots up in every inch of the back garden.  We knew we were buying a horsetail-crowded garden, this was the one thing we could remember from our viewings!  We thought we had the energy to tackle them but they are robust and vigorous plants and as I pull them out and dig them up I both admire their strength and hate them.  Getting them under control may take the rest of our lives!

We are following a long line of retirees to Morecambe and there is plenty of evidence that the previous owners had some mobility problems, with handrails and additional steps.  As we were moving the additional flagstone that someone had added to the steps into our sunken back garden, to give our feet more room, our next-door neighbour leaned over the fence and reminisced about helping the guy put that in place.  Apparently, he was already very elderly when he decided that he needed some extra help on these steps and he was spotted struggling from his car with this long flagstone.

On the garage wall are two colourful metal butterflies which our neighbour said once decorated the front of the house.  Someone adorned the back wall with three squirrel figures that are forever climbing upwards.  Clearing some of the brambles I found a stone tortoise and a stone hedgehog, remnants of when the garden was a different place.  Garden ornaments are not generally our thing but these fragments feel part of the space and they have stayed.

We have a rear wall that has clearly grown almost organically, the brickwork a mixture of styles and brick-laying competence.  In front of this are a couple of sprawling privet bushes.  ‘Ray would trim that privet to symmetrical perfection,’ we were told.  I don’t go in for much symmetry in the garden and after years of neglect the privet bushes needed more hacking then trimming.  I would emerge from among them, twigs and spiders stuck in my hair!

‘This garden has had more attention during this lock down than it has over the last eight years,’ our immediate neighbour remarked the other day.  My laugh is despondency-tinged when he says this.  He knows that we didn’t plan to spend this spring working on the garden and that we had months of campervan trips planned.  But there is no doubt I have been glad to have something physical and tiring to do when we couldn’t go far and I haven’t had the mind-set to write or edit photographs.  I don’t turn to gardening willingly but having our own outdoors has helped me get through lock down.

The most useful thing the previous gardeners left us was a system of water butts.  This survived the tenants and landlord and were just ignored behind the garage.  With such a dry spring we have been so glad to be able to capture what water there is.

We have planted a tree, a couple of bushes of our own, some herbs and patched up the paths but we are trying to avoid letting the garden suck up all our money and disrupt the finances.  I have a forlorn dream that all the work we have done this spring will mean we can just potter doing a bit of light pruning in future years.  We’ll see!