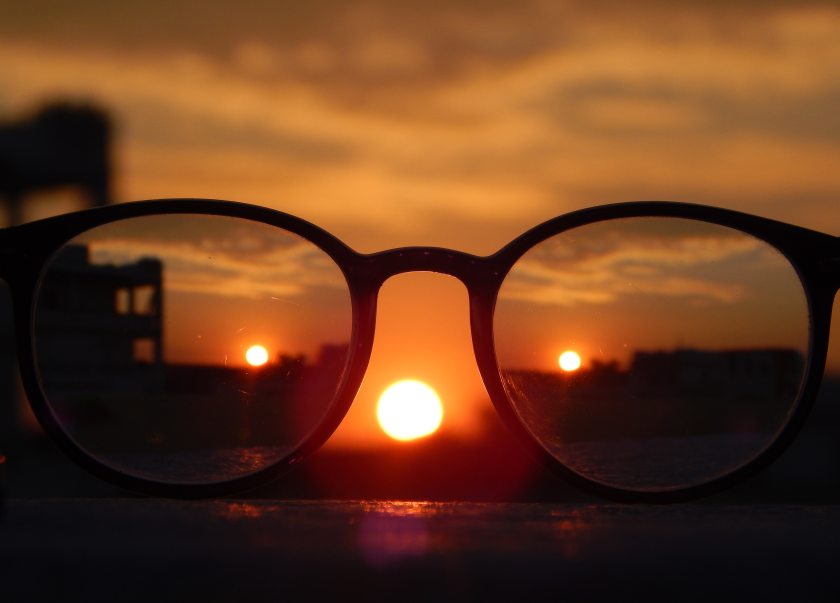 For as long as I can remember I have been visiting opticians.  I have worn specs since I was a small child and these days I am at the opticians every couple of years to have my eyes checked out.  I was born with a right eye that was called a ‘lazy eye’ [amblyopia] something around 1:50 children develop.  This right eye never opened fully and despite treatment as a child [a plaster over the ‘good’ eye and drops to encourage the left eye to do a decent day’s work] all I can see through that eye is a blur.  Because I really only have one working eye I make sure I take good care of it and I blame it for my inability to play tennis!

These days I love buying new specs.  As they are something I wear all the time it is a treat to get new ones and I choose different styles every time in the hope that someone will notice.  Over the years I must have worn every style of glasses,  rainbow-coloured plastic frames with large lenses in the 1980s,  turquoise narrow metal specs and chic black designer frames.

As I was choosing my last new specs [two pairs one for sunglasses and one for cloudy days] I got chatting to the helpful member of staff.  I had chosen a pair of metal frames that had round lenses and I asked the assistant, ‘Do they make me look like John Lennon or are you too young to remember John Lennon?’  He laughed and politely said they looked good, adding, ‘John Lennon is one of the most popular spectacle wearers customers mention, along with Harry Potter.’  Slightly put out that I hadn’t been more original, I tried on another pair with large lenses that reminded me of another famous spec wearer, Deirdre Barlow.  We are in Salford so despite the assistant’s tender years this was another familiar name; Deirdre was well known for the big glasses she wore in the popular soap, Coronation Street.

As Mr BOTRA and I walked home we mulled over other iconic spectacle wearers, perhaps I could have come up with fresher examples.  We considered how Woody Allen would seem undressed without his black Moscot specs.  Mahatma Ghandi is familiar in his round metal-rimmed glasses, similar to those of John Lennon and perhaps a more creative suggestion next time I am at the optician.  Other famous spec wearers came to mind.  It is reported that Elton John owns thousands of pairs of specs in a rainbow of colours; Dame Edna Everage sported stunning ornate frames or ‘face furniture;’ Bono is a man many of you will think of wearing shades; and [even though she changes her glasses frequently] I always picture Billie Jean King in a pair of thick plastic specs.

In the 1970s wearing glasses wasn’t at all cool, although they always made you look more intelligent!  As a child I hated being the only one among my friends that had to wear specs and for a short time as a teenager I stopped wearing them at all.  I pretty much had little idea what was going on around me during that period as the world went by in a blur but it was a time when I didn’t really care to engage with the world.  Contact lenses aren’t really a good idea when you only have the one functioning eye and specs were my only option.

Fortunately, my first job was working in an optician’s shop and the only perk was free specs; at last I could buy something more up-to-date that I was prepared to be seen wearing!  My enthusiasm for the variety of spectacle frame design began here.  Today I am happy wearing my specs and I am grateful to all these iconic spec wearers for making it fun and even trendy.