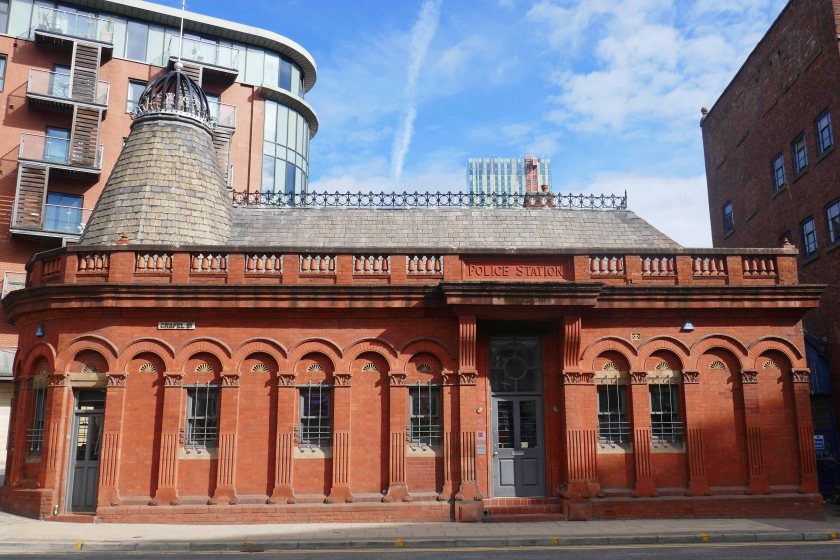 This is surely one of the most attractive police stations you have ever seen.  The old police station on Chapel Street in Salford is near to the junction with Blackfriars Road and on the junction of Chapel Street and Salford Approach.  The latter went to the former railway station.  This is the historic core of Salford and at one time this police station would have faced the busy Flat Iron Market place, a bustling area of second-hand clothing stalls and auctioneers with lively patter and a fairground with roundabouts, shooting galleries and a boxing booth.  A History of the County of Lancaster: Volume 4  originally published by Victoria County History, London in 1911 described the market as a ‘sort of rag fair.’

This charming red brick building was built in 1888 and above the door you can still make our the ‘Police Station’ sign.  The single-storey building has an unusual curved end with a short spire above it and a decorative baluster around the roof line.

For a time the old Police Station was boarded up and its future looked dismal.  Today, despite being surrounded by new build offices and flats the building appears to be safe at least in the short-term, it is listed and is now used as offices.  Apparently between its life as a police station and its current use it was also used as a tram ticket office.

Salford City Council plan to improve this part of Salford, known as Greengate, in their Chapel Street East Scheme.  The proposals include cycle and pedestrian friendly routes which can only be an improvement on the area which is currently a nightmare for those on foot and two wheels.  The Greengate Regeneration Strategy states:

‘The Vision of the Strategy is to deliver a dynamic
residential and commercial place with an exceptional
public realm. Greengate will be a focus of cultural
activity for both residents and visitors alike, building
on the current strong brands within the area and
developing new exciting opportunities. The area
will witness the regeneration of important historical
aspects of the Collier Street Baths and the Market
Cross.’