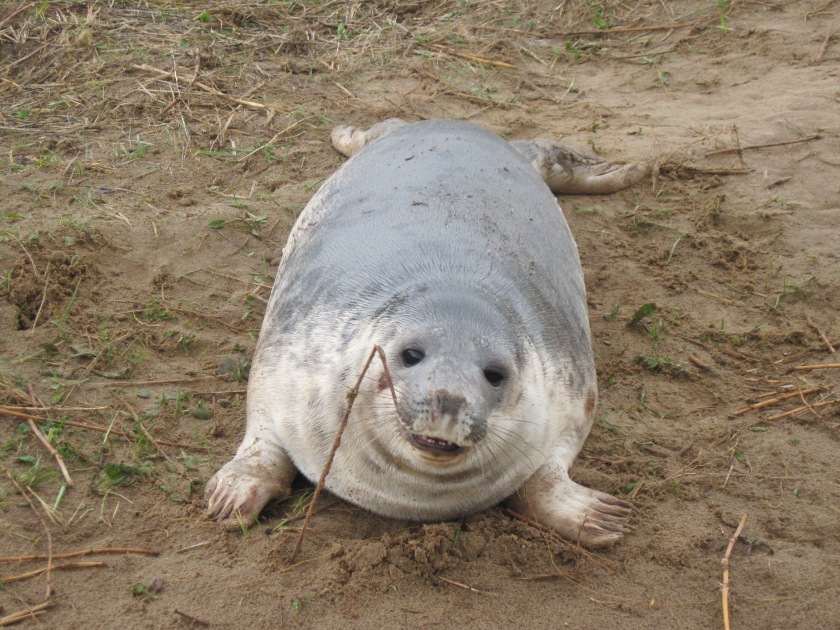 In our first campervan we only had one winter camping trip.  It was a memorable February weekend of below freezing temperatures that found us shivering under the duvet after the leisure battery lost power and our diesel heater no longer worked.  Moving on to our Devon Sundowner [for some reason] we were keen to try winter camping again and I persuaded my hardy partner to go along with a late November trip that would perhaps quieten the ghost of that cold February weekend.

We chose to go to the coast of North Norfolk and Lincolnshire and the Fens, thinking the south-east of Britain might be warmer and drier; we’d never visited that part of the country before, as our natural compass takes us north from Manchester and we were keen to visit some of the many RSPB and Wildlife Trust reserves in that area to see the migrating geese and other wildfowl.

In the Sundowner our on-board facilities were limited to a toilet, a kitchen sink and a kettle.  I found that campsites open during the winter that hinted at the promise of warm showering facilities were few and far between in the area we were exploring; so although we like to be free spirits, we decided to research, plan and book campsites for each night of the trip.

Friends raised eyebrows when we told them we were taking the ‘van camping at the end of November and their incomprehension only increased when the five-day weather forecast was predicting storms and heavy rain for the weekend we were away.  These storms did arrive and hit Cornwall very hard and we were relieved we had chosen the east side of the country for our holiday, where it was breezy, but no one had to leave their homes because of rising flood water.

Arriving on a campsite in the dark left me in a slightly disconcerted state, I like to orientate myself, check where the sun will come up and what the ground is like and after the first night we vowed to try and arrive before dark in future, although in late November this means arriving by 16.00.  However, my perturbed state didn’t stop us making the 10-minute walk through the village to the cosy Burnham Green pub.

The next morning we woke to faultless blue skies and were immediately sold on winter camping for all time, no matter that the shower cubicles were so cold, only the most hardy would consider baring all in there [apparently there have been renovations since our visit].  I reasoned that we were so wrapped up against the chilly air, no one would ever notice we were grubby and we were just keen to get out on to this bright November coastline.

Titchwell Marsh RSPB reserve is an excellent spot, providing the opportunity to stretch the legs alongside fresh water and salt marshes to the vast stretch of beach.  I am not a natural bird watcher but I like to know the RSPB and other charities are out there managing habitats for birds and I enjoy what I see.  Oystercatchers are my favourite, as they are easy to spot and always so lively and vigorous and I also enjoyed watching the red shanks feeding in the mud, easily spotted with their red legs and the more ponderous godwits and then spotting the different ducks, including Teal and Widgeon.  If you are lucky and patient here you will see a drift of Snow Buntings on the beach, but it was too wintry to stay still for too long.  The reserve staff also feed the birds in the woodland near the visitors centre and I got just as much pleasure watching the garden birds coming and going at the bird tables while we warmed up with a mug of hot chocolate; this reserve certainly has something for everyone in the winter months.

After lunch we drove the few miles along the North Norfolk coast to Wells-Next-The-Sea to walk along the sands, comparing the size of the beach huts that are lined along the beach to the dimensions of our Blue Bus and wondered why no one was using them on this glorious November afternoon.

We succeeded in reaching the camp site on the edges of Swaffham before dark and were pleased to find much warmer facilities where we were prepared to shower and scrub off the accumulated grime of the last couple of days.

Although this trip was focusing on wild life, the next day we made a short pilgrimage to the Burston Strike School.  Whatever your politics, I dare anyone not to find this small building inspirational.  It is the site of the longest strike in British history, starting on 1 April 1914, when two popular and devoted teachers at the village school, Kitty and Tom Higdon, were dismissed by the school committee for lighting a fire to warm the children and dry their wet clothes.  Of the 72 children, 66 marched around the village to protest about their dismissal and refused to attend the school, instead they continued their education with Kitty and Tom in temporary accommodation, supported by trade unions from across the country.  In 1917 sufficient funds were secured to build a new school building and bricks in the walls are carved with the names of the trade unions that had provided financial support; a small museum is now housed in this building.  The Burston strike school continued to be the place of education for the village children until 1939.

Redgrave and Lopham Fen is the largest river valley fen remaining in England, with pools, reeds, scrub and woodland it will be a buzzing and lively place in summer, with butterflies, insects and flowers.  In winter it is sultry and peaceful; the reserve is well laid out with five different marked trails to follow.  We watched a tree creeper flitting up and down a tree trunk and a flock of gold finches and enjoyed the sense of space and stillness this strange landscape offered.

We chose to stop in Thetford Forest to have our lunch, an impressive area of mixed woodland and heath, criss-crossed by roads.  High Lodge is the main visitor centre for the forest, with a cafe, shop, toilets, access to numerous footpaths and cycle tracks, all with a large car park and even in winter it was lively with cyclists and walkers.

We arrived at the small camp site at Littleport in rain that didn’t stop until the next morning; we were catching the tail end of the storm that had hit the West Country and we hunkered down in the van with a bottle of red and never made it to the nearby pub by the Great Ouse.  The site owners let us pitch on the track, as there was no hard standing available, which saved churning up their grass or worse the embarrassment of needing a tow to get out.  Our neighbours, two stalwart fishermen, slept in a tent and were disturbed all night by the wind and rain, we had sleeping bags and duvets and slept soundly until daylight.

The sunshine returned after the storm, although the strong wind stayed with us a little longer and we were feeling blessed for having such good weather for our winter venture.  We now pointed the Blue Bus north towards Lincolnshire, into a fascinating landscape of vast flat fields of vegetables, driving over drainage ditches and through an environment where the sky dominates, rather than the land.

Frampton Marsh is accessible down narrow lanes that take you to the RSPB coastal wetland reserve on the edge of The Wash; once at the modern visitors centre there is a good size car park.  Frampton Marsh has enough brent geese to satisfy anyone and I also saw plenty of acrobatic lapwings, always a cheery sight.  I easily spotted little egrets in the shallow pools, their white plumage bright in the sunshine and watched curlews feeding on the wet grassland areas.  Despite the strong winds, we walked down the lane to the dyke, where we had a clear view across the salt marshes to the North Norfolk coast.

Slightly further north, Gibraltar Point National Nature Reserve is a popular and well known reserve near to Skegness; this area of dunes, salt marsh and beaches is a beautiful wild spot with many walks and managed by the Lincolnshire Wildlife Trust.  As the sun dipped towards the horizon, we had a windswept walk through the dunes to the beach here, before tearing ourselves away and driving through the bright lights of Skegness to our refuge for the night, The Nurseries at Mumby, before dark.  Karl and Dianne have been enthusiastically developing the camp site since they moved to the old nurseries house in 2010 and have created a lovely site.  They are both very welcoming and we were thrilled when Dianne appeared with two chunks of homemade cake to go with our brew.

Karl and Dianne are both also full of information about things to do in the area and while chatting to Karl, he mentioned the nearby seals and pups and we soon had the map out planning a trip to Donna Nook on our way home.  Donna Nook is a long sandy bay which during November and December each year is the place of choice for over 1,000 grey seals to give birth to their pups and mate, ready for next year.  There are two  car parks and they get busy, particularly at weekends but we were surprised how popular it was even on a wet Monday morning.  The beach is managed by Lincolnshire Wildlife Trust and they ensure visitors get excellent views of the seals while staying safe and avoiding the danger of getting bitten by an angry grey seal.  Photographers will love the opportunity to get so close to adult grey seals and their pups.  The white fluffy pups lie in the sand and cannot help but look cute with their big eyes and whiskers, the male grey seals are large and cumbersome and manage to both flop and be aggressive at the same time.  You can see pups being born, suckled and having their first taste of swimming in the shallow pools; it really is a special wildlife experience that concluded our holiday on an unexpected high.

As we drove back to Salford we reflected on our few nights winter camping; the van had been cosy and warm, the wildlife had been spectacular, the weather had been kind and we had coped with some chilly sanitary facilities with the hardiness of northerners.  This trip was a few years ago and gave us confidence so that today we don’t think twice about getting away whatever the weather.

2 thoughts on “A Winter ‘s tale from a campervan”